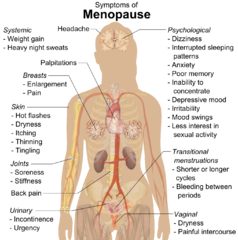 Here is a brief look at a recent call I received from a 54 year old woman in menopause with a long term and unaddressed eating disorder. It's one of many I'm receiving lately from menopausal women. Some are more positive about getting help, but all seem oblivious to the role menopause is playing in their emotional and eating disorder lives.

I'll call this particular woman Margaret. She has no family, little money, an unsatisfying job and is frightened that none of her dreams are coming true. She binges. She has no children. She's fighting to look good so she can have a boyfriend. Her Candida is plaguing her and the Candida diet is triggering her eating disorder.

She wanted me to listen to her during a free consultation for as long as possible. The fifteen minute consult extended to 40 minutes.  Yes, I could have ended it, but I stayed on the line wondering if she would eventually reach a point where she would ask for the help she desperately needs.  She did not ask.

She told me about her past low level jobs that kept her isolated and her new job that is stressful and demanding. She told me she used to have an eating disorder but doesn't anymore. She said she was binging out of control and that the Candida Diet was responsible. She said she was following the diet about 80% of the time.

I said that in order to work the Candida Diet has to be followed 100% of the time or you just inflame the starving fungus to devour what it needs and grow rapidly.  Such a diet is often triggering to a person with an eating disorder.  Margaret asked if I knew her health care person since I was saying exactly what he said.

She said she's seen several therapists over the years for about three or four weeks each, and they didn't help. She said she's read many books and been part of Landmark which used to be called EST. She said she wasn't a therapist but she knew enough to be one.

Margaret asked if I knew anyone in her city she could talk to. She's committed to finding a short term solution that will end her suffering and give her the life she wants.

Do you hear the eating disorder reverberating through her words? She wants a solution she can take in fast to solve her problems. That's what a binge is supposed to do. The eating disorder has given her a template that says, gobble this up fast and you'll get peace and safety.  But what you actually get is numbness during the gobbling. That numbness sometimes feels like relief. When the binge is over you are just where you were but a little older, a little heavier and a little more frightened and despairing.

Your challenge is to recognize opportunity. The reality is that you have to move beyond or away from the eating disorder template to develop in a new way, independent of your old and ineffective solution attempts.

What are recovery opportunities for you?  Make a list. Then see how many points follow your eating disorder way of thinking and how many come from a glimpse into new possibilities.

Tips: Disregard items on your list that come from eating disorder thinking such as:


Menopause is a time for readjustments and new self evaluation. It's a time of endings and beginnings. Let it also be a time of commitment to recovery.

Eating Disorders and Women Over 50


Eating disorders: Not just for the young

The Transition to Menopause:
Time of Increased Risk for Eating Disorders

I just turned 50 and have been noticing little signs and symptoms. I've been managing ED pretty well for a couple of years and eating and weight is fairly stable but I still have a lot of work to do with body image and self compassion.

I'm finding that some of these early symptoms are triggering fears that draw me back into ED thinking. I have a lot of anxiety about MP taking over my body. My mom had a rough experience with MP and she is gone so I can't ask her how she managed. It's a little daunting waiting to see what happens.

Good to see everyone back online again

I'm proud to say that I'm finally back in recovery again (my relationship with food is taking care of itself without me needing to interfere in the process - it's been a long time coming, and is definitely a relief, as I'd started to worry that I might never be in this place ever again.)

I'm in my mid-forties but haven't had any menopause symptoms yet, my body still ovulates like clockwork....but one thing I have noticed about being back in recovery is just how much I'm affected by the hormonal changes throughout my cycle. I'm on day 2 today, and whilst I feel positive and confident and generally cheerful, the smallest things make me cry (I was like this yesterday too). Fingers crossed I won't be like this for too much longer!

Please remember, eating too much, too little, purging, obsessing about food all serve to negate emotions. If you are changing your patterns and honoring your body more then your emotional life will become more revealed to you.

This is not an intellectual exercise. You don't get intellectual understanding.  You get the feelings.
Just ride with them and your experience.

It can be nice to cry a naturally felt cry when you haven't for a while.  Your body is letting go of the extra work it's been doing to deal with your emotional life.

Your body gets release and you get the wonder and privilege of knowing what you actually feel.

Give yourself time release, feel and make this your new normal. You'll discover your own natural rhythms.  Best of all, you give food to your body for nourishment.  You give patience, kindness and understanding to your emotional life.  And, you know the difference!

0 # Subject change — mylifex2 2015-10-05 00:10
so sorry to use this area to change the subject a little, but some of us have known each other quite some time. I want to let you know that my sweet mama is losing her battle with dementia. We have a few more days with her. this is a very stressful time and I could use it as an opportunity to relapse. Instead, I find that I am sticking to a gluten free, vegetarian diet. I have been experiencing some early menopausal symptoms such as sweating and missed cycles here and there. My mom had a late meno -pause . I'm trying to take a more natural approach with my diet. Using coconut oil to bake and fry with. avoiding soda- especially diet sodas.
I am in a support group that is helping me to get thru my moms illness Without relapsing. I've been using my insulin correctly and not manipulating it to lose weight. I had been in a weekend ED program but had to terminate early to help with my mom who was living at home until this current hospitalization. I meditate and write out quotes I like. I read my HHH to keep myself grounded.
say a prayer for my mama that she will stay comfortable.  pray for my dad for strength as well as the rest of us As we say goodbye to mom. Pray that I can stay in recovery during this rough time. Thanks guys, for listening ❤️

Sounds like you are doing a magnificent job in any circumstances, nevermind such a difficult emotional time!

I will keep you and you family in my thoughts, really hoping your mom passes as peacefully as possible.

0 # Thanks for your book — Guest 2016-05-07 22:41
I just finished reading your book. I am 62 and have had an eating disorder most of my life. It started out as anorexia lasting several years, but then gradually morphing into a complete obsession with healthy food/eating/exercising. I also deal with complex ptsd. My whole life has centered around avoiding sources of anxiety/panic. I started working with a therapist a year ago. Reading your book helped me. I sometimes feel so ashamed of myself, but your book had such a kind, nurturing tone that by the end of it I felt more accepting of myself.
Refresh comments list

We have 55 guests and no members online